In December, I came across a Mashable article titled “‘Saga’ is the must-have graphic novel of 2014.” Okay, you’ve captured my attention. I like graphic novels (despite the fact that Persepolis is the only one I’ve ever actually read… Oops). Though usually when someone says, “Go get this book/game/movie,” I take that advice with a grain of salt. But for some reason with Saga, I couldn’t get the article out of my head. I wanted the book ASAP, though I couldn’t tell you why. So I used some Christmas money and picked it up just after the holiday and sat down to start reading. 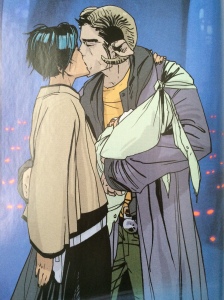 Chris Taylor, author of the Mashable article, does a great job of telling you what Saga is about and why it’s a compelling graphic novel. It’s about two star-crossed lovers who come from a warring planet and its moon who are trying to navigate the galaxy with their new-born daughter while being hunted by everyone who wants to destroy the “abomination” of their union. The mother, Alana, comes from the planet Landfall where everyone has wings, and the father, Marko, comes from Landfall’s moon, Wreath, and has horns. Landfall and Wreath have been at war with each other so long that no one knows why, but the conflict has been spread across the galaxy. Alana and Marko, who should be sworn enemies, have fallen in love despite, and maybe because of, this fact. Sound a little like Romeo and Juliet in space? You’ve got it. I would mostly agree with Taylor’s description of Saga as “Star Wars meets Game of Thrones meets Romeo and Juliet meets Dr. Spock’s Baby and Child Care,” though the Game of Thrones part only comes into play in that anyone could be killed at any moment, and you never quite know who’s safe and who’s not.

I tried very hard not to devour this whole collection (the first 18 issues of the monthly comic) at once, but it was hard. Each chapter ends on a great cliffhanger, and the characters and the universe just suck you in. I think my favorite part through this whole bizarre, complex universe is how easy it is to relate to the characters. Obviously I don’t have wings or horns, I’m not a ghost or a cyclops, but all the characters are written in a way that if they showed up in your living room, you could carry on a conversation no problem. Though you probably wouldn’t want them sticking around too long for fear of becoming collateral damage… 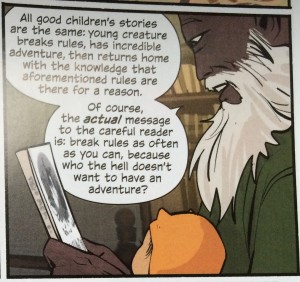 I think I find the characters so compelling and relatable partly because the way they talk is so current. They talk like they’re coming from 21st century America, so when they drop some universal truths on you, they connect even more. Also, every character swears like a sailor, which I always appreciate. When you’re being chased by two armies and several mercenaries, you’re gonna drop an F-bomb a couple times.

I also really like the art. The illustrator Fiona Staples does a really beautiful job depicting backgrounds of new planets and outer space, but I think her best depictions are of the characters’ facial expressions. Combined with their voices, the characters’ facial expressions add a whole ‘nother layer to their realness that I don’t think just anyone could pull off. From page one I was drawn into the art as much as the conflict and the conversations.

I’m not gonna lie, Saga is pretty weird. As Taylor writes in his article, Saga’s author, Brian K. Vaughan, has been “working on the details of the Saga universe since he was a kid; it first arrived on paper, apparently, when he was bored in math class. Given all those years he spent thinking about it, it wouldn’t be surprising for Vaughan to make a mistake common to the space opera genre—overwhelming us with detail, trying to impress us with all the world-building. In fact, he gives us just the right amount of background information—almost nothing.”

Sometimes, this “almost nothing” means you turn the page into an undeniable WTF situation. For instance, there’s a planet called Sextillion that is one giant red-light district brothel. Why is it there? Where did it come from? How does the character’s ship who’s visiting this planet get him there? We don’t know, and that’s just fine. I will also add, Vaughan and Staples don’t shy away from showing sex. Or blood and gore for that matter. If you’re not into graphic images or graphic language, I probably wouldn’t suggest this work to you. But if you’re like me and think that the realistic depictions of a bloody war and all the language that goes with it only add realism to an otherwise very fantastical world, this could be for you.

I really enjoyed Saga, every bit of weirdness and all. The ‘verse Vaughan has created is sprawling and intriguing, the characters are real and diverse, and the writing, illustrations, and storytelling are spot on. I need to go pick up the next few monthly issues that are out so I can continue the epic journey. I hope this saga continues for quite some time, and I look forward to seeing where it goes.